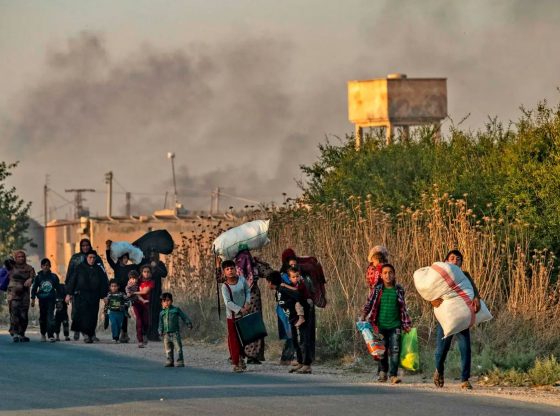 Kurdish leaders travelled to Brussels on Thursday to appeal for help from the European Union against Turkey’s military offensive into northern Syria.

Ilham Ehmed held a press conference in the European parliament, where she was flanked by supportive MEPs who urged the EU not to “abandon” the autonomous region.

Speaking through a translator, Ms Emend called on the EU “to implement a no-fly zone to punish Turkey for violating international law” and for member states recall their ambassadors from Ankara.

Ms Ehmed, who chairs the Executive Committee of the Syrian Democratic Council (SDC), said she would be meeting with European leaders on her visit. She said that the United States had reneged on promises to keep the region safe, despite its forces’ role in combatting Isis.

Kurdish-led forces from the Syrian Democratic Forces (SDF) were instrumental allies in the fighting against Isis, with the US supplying them with arms and weapons. The SDF lost some 11,000 fighters in the years-long battle against the militants.

The EU has condemned Turkey’s attack on the region, with a joint statement of the 28 member states calling “upon Turkey to cease the unilateral military action.”

European Commission president Jean-Claude Juncker also told the European Parliament on Wednesday that “Turkey must cease the ongoing military operation” and that it should not expect EU support to deal with refugees.

But the bloc has stopped short of committing to any action, diplomatic or otherwise to put an end to its Nato ally’s offensive.

Speaking alongside Ms Ehmed, Özlem Demirel, a leftist German MEP who is vice chair of delegation to the EU-Turkey Joint Parliamentary Committee, called for the EU to “use all diplomatic and economic measures to prevent Turkey from continuing”.

“I regret the fact that the EU has waited a long time before giving a clear statement about the attack from Turkey. I think we could have heard clear words much earlier,” she said.

Turkey views the SDF as terrorists and potential allies of Kurdish separatists in Turkey. The SDF says Turkey is trying to ethnically cleanse areas of Kurds and change its demographics.

She continued: “If we didn’t fight against Daesh, this terrorist organisation, then the whole international community would be in danger. There are still some sleeper cells of Daesh in Syria and they are ready to wake up again. The SDF fight war against Daesh is still going on.”

François Alfonsi, a French MEP from the Greens/European Free Alliance told reporters: “This is an act of great seriousness and Europe must respond to it, so the those who are responsible become the military and political losers.”

Julie Ward, a Labour MEP, added: “We cannot abandon the Kurdish people, and that’s why it’s so important that we are having this press conference here today.”