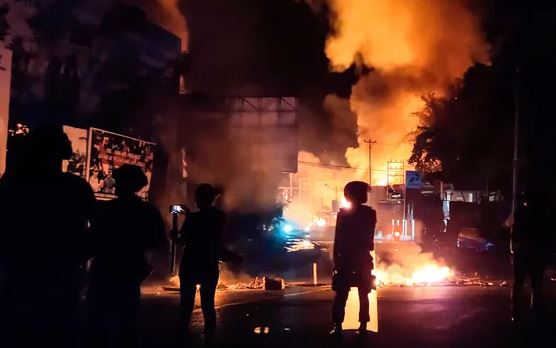 Protesters in Indonesia’s easternmost region of Papua have set buildings ablaze in the provincial capital Jayapura, forcing the state power firm to cut off electricity in some districts, state media and an executive of the utility said.

In the wake of Thursday’s unrest, Papuan independence leader Benny Wenda called for UN to act on the crisis, the result of related protests about racism, discrimination and calls for independence. “Indonesian security services may turn it into a bloodbath,” Wenda said, referring to the 1991 Santa Cruz massacre in which hundreds of mourners at a funeral were shot by Indonesian forces.

The region has been racked by civil unrest for two weeks over reports of racial and ethnic discrimination. Some protesters are also demanding an independence vote – a move ruled out by the security minister on Thursday.

During the riot in Jayapura, the protesters torched a building housing the offices of state-controlled telecoms firm Telekomunikasi Indonesia. The company said in a statement it could not assess the full damage yet.

The utility company PLN has turned off power in areas around the torched building, said regional director Ahmad Rofik, and state energy firm Pertamina said it had shut several petrol stations in Jayapura because of the protest.

Gunfire broke out a day earlier between protesters and police in the town of Deiyai, about 500km (310 miles) from Jayapura.

Police said one soldier and two civilians were killed in the incident, while a separatist group said six had been shot dead. The military dismissed that as a hoax.

Explainer: What tools could Trump use to get U.S. firms to quit China?
Indonesian president postpones plans to outlaw extramarital sex