‘I Can Still Smell Him’: For 4 Legislators, the Child Victims Act Is Personal 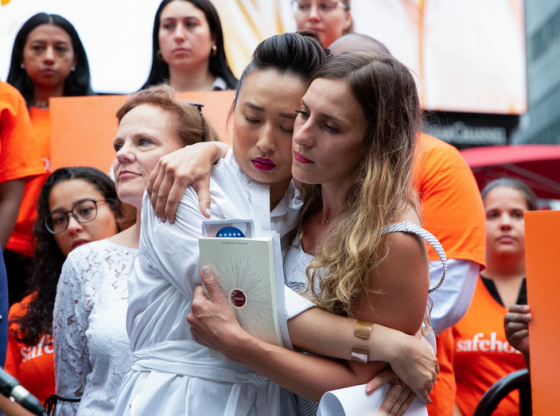 Sexually abused as children, four Albany lawmakers told their own stories to raise awareness about the law.

Yuh-Line Niou told no one for years. And then, one day, she told everyone.

“I was 13 years old, and it was a teacher, and I can still smell him,” she said, trembling.

It was Jan. 28, and lawmakers were about to vote on whether to extend the statute of limitations for child sex abuse survivors to seek recourse. Ms. Niou, an assemblywoman who represents Lower Manhattan, wanted to underscore the deeply personal nature of the bill.

In what became an unplanned show of solidarity, three other legislators that day revealed that they too had been sexually abused as children. Their speeches, raw and powerful, were another sign of the shift at the State Capitol, where new Democratic leaders have fewer qualms about showing emotion.

“Albany is not a place where you find love and mindfulness or thoughtfulness or compassion, and the fact that each of us felt like we had a space to do that just signifies also the tectonic shift of what’s going on there,” said Senator Alessandra Biaggi, a Democrat who represents parts of Westchester County and the Bronx, and one of the lawmakers who described being sexually abused before the Senate vote.

The other two lawmakers, Rodneyse Bichotte of Brooklyn and Catalina Cruz of Queens, explained their support for the bill by talking about being abused from the floor of the Assembly.

The bill, known as the Child Victims Act, passed nearly unanimously that day. As a result, victims of child sexual abuse have until they turn 55 years old to file civil lawsuits against their abusers; prosecutors can file felony criminal charges on behalf of victims until their 28th birthday. The law is not retroactive, but comes with a so-called look-back window that began on Wednesday and lasts for a year, allowing people of any age to file a civil suit, regardless of when the alleged abuse took place.

The lawmakers who spoke about their experiences now find themselves navigating a new reality. No different than other survivors, they spent years hiding their scars.

Ms. Niou said she had been suicidal. Ms. Biaggi said she had developed bulimia and anorexia. Ms. Bichotte said she would distrust fathers with their daughters. Ms. Cruz said she had experienced anxiety attacks. All four have struggled to maintain emotional and physical relationships. But, they said, they are trying to open up as much as feels comfortable to inspire constituents to do the same.

Together they filmed a public service announcement to raise awareness about the new law with Safe Horizon, a nonprofit advocacy group for victims. Ms. Niou also filmed a version in Mandarin, while Ms. Cruz did one in Spanish and Ms. Bichotte recorded a version in Haitian Creole. Their faces are shown on ads that ask, “Are you a survivor of childhood sexual abuse like me?”

When their joint announcement was broadcast in Times Square on Tuesday, Ms. Niou, Ms. Bichotte and Ms. Biaggi were present, slipping their arms around one another as they watched. Later they gave Twitter shout-outs to Ms. Cruz, who was unable to attend. The four are on a group text chain, and often send each other messages of encouragement.

Each still finds it unbelievable that they spoke about what had happened.

Ms. Biaggi, 33, was the first that day to share her personal story of abuse, addressing the Senate chamber with confidence.

“The trauma manifests into many different forms,” she told the room. “For me that silence lasted for 25 years, and it is almost unthinkable that I could stand here as a New York State senator to speak about something that I thought I would probably take to my grave.”

After watching footage of the speech, Ms. Biaggi said she found it impossible to reconcile the image of herself with the girl who had grown up harboring a secret. “On the floor of the New York State Senate, are you kidding? I’m just like, ‘Who is that person?’”

She later learned that around the time she spoke, the Assembly chamber on the other side of the Capitol was also stirring with emotion.

There, Ms. Bichotte asked colleagues to imagine a child violated and abused, forced to bury a terrible feeling of shame that never goes away. She mentioned the local pastor who she said began molesting her when she was 10 years old.

“I was afraid for a very long time to come forward,” Ms. Bichotte, 46, told the room. “For the risk of being blamed for my own pain.”

It was not the first time Ms. Bichotte had spoken to colleagues about her molestation. But Ms. Niou, 36, had not yet heard the story. After hearing it on that day, she was inspired to take a shaky breath and rise to add volume to her voice. She cried through much of it.

Ms. Cruz had initially planned to read a simple statement that said she supported survivors in their healing process. But as the two other assemblywomen spoke, she began to shift nervously in her seat. Her hands were sweaty. She wanted to weep, and she suddenly felt the need to say the words that she had hidden.

So she stood. And she told the truth. A family member had touched her, and she has never been the same.

“I felt like I wasn’t alone for the first time in my entire life dealing with this,” Ms. Biaggi recalled. “That was transformational for me.”

Ms. Biaggi and Ms. Niou are close friends and housemates in Albany. The two had previously mentioned their shared experiences to each other, but not in detail. Being public about it has since deepened their bond. And this commonality in their friendship, they said, illustrates not only the prevalence of child sexual abuse, but also the culture of shame and silence that shrouds it.

They still have boundaries to their stories. Ms. Biaggi did not want to describe her abuser, except to say the person was older. Ms. Niou and Ms. Cruz declined to reveal their attackers’ names. Ms. Bichotte was more comfortable giving details, but has still never had a private conversation with her mother about it. None of them plan to file lawsuits against their abusers.

But they insist they have found justice in the new law. It got them talking about what had happened, they said, and might get other survivors to open up as well.

“There’s so much darkness around this,” Ms. Biaggi said. “The forum to be able to talk about it, is a light.”

Restricted
Explainer: What tools could Trump use to get U.S. firms to quit China?