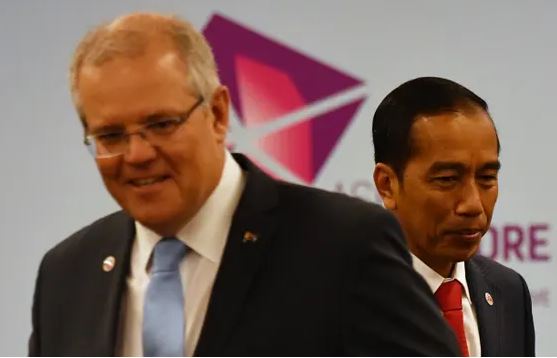 Labor is holding out its support for the Indonesian free trade agreement signed off by the Coalition in the previous parliament, as the trade minister, Simon Birmingham, warns against a retreat into protectionism following a meeting of G20 trade ministers.

Speaking to Guardian Australia following the meeting in Tokyo over the weekend, Birmingham said that given trade tensions between China and the US, the country’s signed agreements with Indonesia, Peru and Hong Kong carry additional importance.

Labor had committed to reopening negotiations on the Indonesian and Peruvian free trade agreements if it won office at the May election, with the aim of removing clauses relating to investor-state dispute settlement (ISDS), while pushing for labor market testing.

The opposition’s new shadow trade minister, Madeleine King, said that given Labor had not formed government, it would wait for parliament to scrutinise the proposed FTAs before it would agree to ratify any deal.

“We had a commitment going into the election that if we had won, and we didn’t, that we would seek to renegotiate existing agreements,” King told Guardian Australia.

“We are not in government so we are not in a position to do that obviously, so I will have to go through those issues with my colleagues and see where we land.”

King said the Australian Council of Trade Unions, which has expressed concern about the Australia – Indonesia deal, was one of the many stakeholders the party would have to consult before landing on a final position.

The proposed FTAs will be reviewed by parliament’s Joint Standing Committee on Treaties, which is controlled by a government majority and allows for a period of public consultation.

After supporting legislation for the so-called TPP-11, which was signed after the collapse of negotiations for the US-backed Trans Pacific Partnership, Labor adopted a more hardline position at its national conference requiring independent assessment of the benefits of trade deals and the outlawing of investor-state dispute settlement clauses.

King said that there were some “legitimate” concerns in the community about the benefits of free trade deals.

“People are concerned about their own jobs and I some times think there is a misconception that trade can affect their prospects for employment negatively,” King said.

But she emphasised Labor was a supporter of free trade, and pledged to examine each trade agreement “on their own merits.”

“Labor has always been a supporter of free, fair and open trade so we always seek to encourage good quality multi-lateral trade agreements that will benefit both Australian workers, but also workers … in the countries that we deal with,” King said.

Birmingham urged Labor to ratify the agreement in the “national interest”, pointing to its criticism of the government when there had been a delay to signing the deal with Indonesia last year.

“I trust that they will put the national interest first in terms of the significance and strategic importance of our relationship with Indonesia and support its entry into force,” Birmingham told Guardian Australia, saying he wanted the agreement ratified by the end of the year.

“It provides significant new market access that allows our farmers and our businesses to diversify the markets into which they sell and that diversification is even more important than ever at a time of increased trade tensions.”

As global trade is rocked by the ongoing trade dispute between the US and China, Birmingham also said Australia would have liked to see the G20 recommit to “stand against protectionism” in its final communiqué.

“We would have preferred a communiqué of greater ambition that recommitted, as has been the case in the past, to stand against protectionism and to pursue more open markets … but we appreciate there are strong views coming from a couple of different directions at the minute,” Birmingham said.

“The message we gave clearly is to urge China and the US to talk and work through the issues, some of which are legitimate issues of concern between the two, but to recognise escalating tensions are bad for their businesses, their economies and their communities, but they are also bad for everyone else who relies on economic growth.”