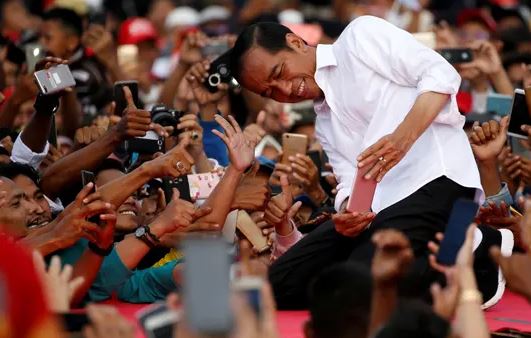 Heavily armed troops are on high alert in Indonesia amid fears of civil unrest after the incumbent president was declared the winner of last month’s election in a surprise early announcement by the election commission.

Joko Widodo took 55.5% of votes against 44.5% for his challenger, retired general Prabowo Subianto, the commission said on Tuesday.

Prabowo vowed to take his claims of widespread cheating to court as several thousand supporters rallied in the sprawling capital, Jakarta.

The elections commission office was barricaded with razor wire and protected by scores of security personnel on Tuesday, after Prabowo warned that mass demonstrations could break out if he lost.

“We will fight to realise social justice for 100% of the Indonesian people,” Widodo said after the commission announcement.

An election supervisory agency dismissed claims of systematic cheating earlier on Monday due to a lack of evidence, and independent observers and analysts have said the poll was free and fair.

But a witness for Prabowo’s campaign team and the leading opposition party refused to sign and validate the official results.

“We won’t give up in the face of this injustice, cheating, lies and these actions against democracy,” said Azis Subekti, a witness from Prabowo’s campaign team.

Authorities have tightened security in anticipation of potential civil unrest and have detained dozens of militant Islamists suspected of planning attacks to create mayhem during demonstrations.

The official announcement of the election results, made at just before 2am on Tuesday morning, appears to have been a strategic move intended to catch opposition protesters unawares.

Prabowo has said the situation could trigger “people power” protests, while the government and police have urged protesters to keep the peace and vowed action against anyone stirring unrest.

Prabowo supporters from different areas in Java have reportedly been en route to Jakarta to join the planned 22 May protest, with police finding four molotov cocktails on board one minibus of supporters traveling from East Java earlier this week.

The streets outside Indonesia’s General Election Commission were quiet immediately after the announcement.

The losing party can lodge a legal challenge at the constitutional court. Otherwise, the commission will officially declare the winner by 28 May.

Prabowo challenged the result after losing to Widodo at the last election in 2014, but his challenge was rejected.