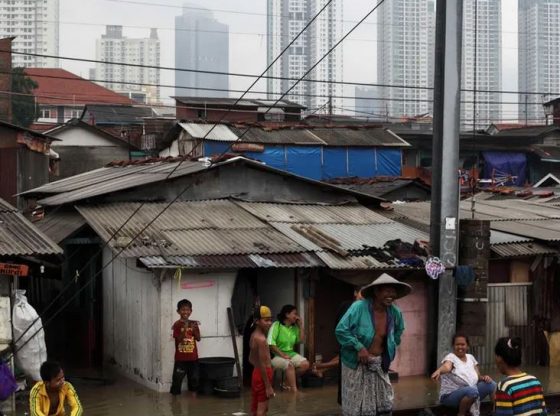 Not only is the megacity of Jakarta besieged by a confluence of modern ills – including pollution, overpopulation and soul-destroying traffic – it is also one of the fastest-sinking capitals in the world.

So when Indonesia’s president, Joko Widodo, known as Jokowi, this week suggested making somewhere else the capital, it did not come as a shock. Indeed, the idea of relocating the country’s administrative centre is almost as old as the republic itself – it was floated by Indonesia’s first president, Sukarno, in 1957 and has been brought up again byseveral presidents since.

If the plan goes ahead, Indonesia would join a long list of countries that have changed capitals, often building cities from scratch for the purpose, from Nigeria and Brazil to Myanmar and Australia. Egypt is currently building a new, as-yet-unnamed capital in the desert to replace Cairo.

But hardly anyone in Jakarta is convinced Jokowi’s plan is serious. “People have heard this before but it is just getting more frequent now, it’s now every two to five years,” said Elisa Sutanudjaja, director of the Rujak Centre for Urban Studies, with a laugh. “It’s just really distracting.”

After a cabinet meeting on Monday days after the city was hit by severe flooding, Indonesia’s planning minister, Bambang Brodjonegoro, said the president had decided to move the capital. However, he provided almost no detail, prompting the ire and derision of Jakarta’s urbanists.

“You don’t solve a problem by just moving it away,” Sutanudjaja said. “Jakarta is quite similar to Tokyo in the 1960s, with its land subsidence, flooding, natural disasters and overcrowding. If you really want to solve the problem then they should tackle it, not just move it.”

The president’s Instagram account on Tuesday posted a bird’s-eye view photograph of Jakarta’s hyper-urban sprawl and mused about whether the city could continue to shoulder the burden of being both Indonesia’s economic and administrative hub.

Malaysia, Brazil, South Korea and Kazakhstan have all successfully moved their capitals so why not Indonesia too, he asked, before soliciting suggestions from Instagram users as to where the next capital should be.

Power in the country has long been centred in Java, the most populated island in the world, and the logic of moving the capital is in part intended to fuel growth in Indonesia’s less developed east.

No specific site has been named but the city of Palangkaraya in Kalimantan, the Indonesian part of the island of Borneo, has been suggested.

But Hendro Sangkoyo, co-founder of the School of Democratic Economics, responded with incredulity to that idea.

The same unfettered and inequitable development that has turned Jakarta into a “monster” of a city would destroy Kalimantan, he said, which has for decades suffered the negative consequences of the extractive industries of gold, coal, oil and gas, as well as logging and, more recently, palm oil cultivation.

“The whole idea to put the most important political processes in an area that is already in a centre of ecological crisis is absurd,” he said. “It’s like moving Canberra into the centre of Australia, right into the desert.”

After reading a document released by the planning ministry, Sangkoyo said the move was more about creating business opportunities for Indonesia’s oligarchy than building a more functional capital.

Ben Bland, director of the Southeast Asia project at the Lowy Institute in Australia, said the scepticism that greeted the president’s suggestion had been accentuated by its peculiar timing.

The announcement came just weeks after a presidential election in which both candidates, the incumbent and his rival, Prabowo Subianto, have rather awkwardly claimed victory.

Before the official results are released in May, credible but unofficial quick counts suggest Jokowi has comfortably won a second term, but the dual claims have fuelled a mild undercurrent of political anxiety.

“I don’t think anyone is preparing to move their home just yet,” observes Bland. “The timing of the announcement looks a little fishy. It looks like an attempt by the president to reassert his authority after the election and amid this ongoing contestation by the Prabowo camp.”

Still, the fact that the idea has been tossed around for more than 60 years is testament to its logic – that Jakarta is busting at the seams, that there might be a better way.

But even with the city’s myriad of problems, Indonesians are unlikely to support a relocation of their capital without being presented with a clear, definitive way forward.

“For people to take the idea more seriously they would need to see concrete plans on where the new capital would be and how they are going to go about implementing this, given the difficulty of pulling off any huge infrastructure project anywhere in the world,” said Bland.

‘It opened my eyes’: the Indonesian woman fighting for West Papuan rights
Terror Attacks on the Rise in Burkina Faso