British Prime Minister Theresa May’s government narrowly survived a vote of no-confidence in Parliament Wednesday as her Conservative Party stuck together to push back an effort to oust the government — despite May’s colossal Brexit defeat a day earlier.

The House of Commons voted 325-306 in favor of the government and against the motion, as Conservative MPs and coalition allies The Democratic Unionist Party (DUP) stood together and fended off Labour Party leader Jeremy Corbyn’s push for an eventual general election. 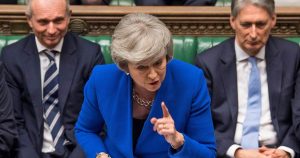 “I am pleased that this House has expressed its confidence in the government tonight,” she said in Parliament moments after the result was announced. “I do not take this responsibility lightly and my government will continue its work to increase its prosperity, guarantee our security and to strengthen our union. And yes, we will also continue to work to deliver on the solemn promise we made to the people of this country to deliver on the result of the referendum and leave the European Union.”

“I believe this duty is shared by every member of this House and we have a responsibility to identify a way forward that can secure the backing of the House,” she said, inviting opposition leaders to meet with her individually, beginning as soon as Wednesday night.

Later, in an address outside 10 Downing Street, she said that those talks had begun, but that she was disappointed that opposition Labour Party leader Jeremy Corbyn had chosen so far not to take part.

“Our door is always open,” she said.

The no-confidence vote came a day after May’s Brexit deal, negotiated with E.U. leaders, was voted down 432-202, the largest defeat for a sitting government in the history of the House of Commons. May had been expected to lose, but the enormous defeat marked a significant blow to her already-troubled time as leader. Her withdrawal agreement both opposition from the anti-Brexit forces and pro-Brexit forces, who saw the agreement as not delivering a clean break with the E.U.

The defeat on Tuesday immediately led to Corbyn tabling a motion of no confidence in the government. Earlier Wednesday, he formally moved the motion. Ahead of the vote, Tories had used debate time to paint Corbyn, a staunch left-winger, as unsuitable for office in part because of past controversial statements and actions.

It is May’s second confidence vote in a month. Last month she faced a vote of no-confidence from within her Conservative Party in her leadership of the party. She narrowly won that vote 200-117 and cannot be challenged by the party until December 2019.

But while May’s future is secure for now, the future for Brexit is still extremely uncertain. Britain is scheduled to leave the bloc on March 29, at the moment without a withdrawal agreement with the E.U. While some on the pro-Brexit wing have argued that Britain would simply revert to World Trade Organization terms, others in the government and in the opposition have predicted chaos at ports and across the country should that occur.