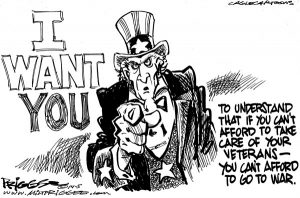 The Veterans Health Administration scandal of 2014 is a reported pattern of negligence in the treatment of United States military veterans. Critics charged that patients at the VHA hospitals had not met the target of getting an appointment within 14 days. In some hospitals, the staff falsified appointment records to appear to meet the 14-day target. Some patients died while they were on the waiting list; reports differ about whether they died because of the delay. Defenders agreed that it was unacceptable to falsify data, but the 14-day target was unrealistic in understaffed facilities like Phoenix, and most private insurers did not meet a 14-day target either. By most measures, the VHA system provides “excellent care at low cost,” wrote Paul Krugman, who believes that the attack on the VHA system are motivated by conservatives who want to discredit a government program that works well. Conservative legislators have proposed privatizing the VHA, and legislative reforms will make it easier for veterans to go to private doctors.