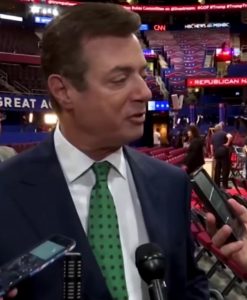 The FBI reportedly began a criminal investigation into Manafort in 2014, shortly after Yanukovych was deposed. That investigation predated the 2016 election by several years and is ongoing. In addition, Manafort is also a person of interest in the FBI counterintelligence probe looking into the Russian government’s interference in the 2016 presidential election.

On January 19, 2017, the eve of the Trump’s presidential inauguration, it was reported that Manafort was under active investigation by multiple federal agencies including the Central Intelligence Agency, National Security Agency, Federal Bureau of Investigation (FBI), Director of National Intelligence and the financial crimes unit of the Treasury Department. Investigations were said to be based on intercepted Russian communications as well as financial transactions. It was later confirmed that Manafort was wiretapped by the FBI “before and after the [2016] election … including a period when Manafort was known to talk to President Donald Trump.” The surveillance of Manafort began in 2014, before Donald Trump announced his candidacy for President of United States.

Special Counsel Robert Mueller, who was appointed on May 17, 2017, by the Justice Department to oversee the investigation into Russian interference in the 2016 United States elections and related matters, took over the existing criminal probe involving Manafort. On July 26, 2017, the day after Manafort’s United States Senate Select Committee on Intelligence hearing and the morning of his planned hearing before the United States Senate Committee on the Judiciary, FBI agents at Mueller’s direction conducted a raid on Manafort’s Alexandria, Virginia home, using a search warrant to seize documents and other materials, in regard to the Russian meddling in the 2016 election. Initial press reports indicated Mueller obtained a no-knock warrant for this raid, though Mueller’s office has disputed these reports in court documents. United States v. Paul Manafort was analyzed by attorney George T. Conway III, who wrote that it strengthened the constitutionality of the Mueller investigation.

In May 2017, in response to a request of the Senate Select Committee on Intelligence (SSCI), Manafort submitted over “300 pages of documents…included drafts of speeches, calendars and notes from his time on the campaign” to the Committee “related to its investigation of Russian election meddling”. On July 25, he met privately with the committee.

A congressional hearing on Russia issues, including the Trump campaign-Russian meeting, was scheduled by the Senate Committee on the Judiciary for July 26, 2017. Manafort was scheduled to appear together with Trump Jr., while Kushner was to testify in a separate closed session. After separate negotiations, both Manafort and Trump Jr. met with the committee on July 26 in closed session and agreed to turn over requested documents. They are expected to testify in public eventually.

The Trump–Russia dossier, also known as the Steele dossier, is a private intelligence report comprising investigation memos written between June and December 2016 by Christopher Steele. Manafort is a major figure mentioned in the Trump–Russia dossier, where allegations are made about Manafort’s relationships and actions toward the Trump campaign, Russia, Ukraine, and Viktor Yanukovych. The dossier claims:

The Guardian newspaper subsequently reported that Manafort had met with Wikileaks founder Julian Assange at least three times, including in the spring of 2016, around the time that Manafort was appointed convention manager by Trump. Assange, at the time taking refuge in the Ecuadorian embassy in London, also reportedly met with a number of Russian nationals. Several months later, Wikileaks began releasing a huge trove of Democratic Party emails, hacked by Russian military intelligence beginning in March of that year.

Manafort has “denied taking part in any collusion with the Russian state, but registered himself as a foreign agent retroactively after it was revealed his firm received more than $17m working as a lobbyist for a pro-Russian Ukrainian party.”