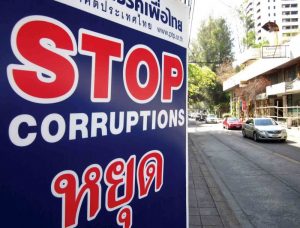 A 2017 governmental initiative to distribute funds to poor people, low-income earners, and HIV/AIDS patients in Thailand’s 76 provinces was looted by officials in 49 provinces. As of March 2018, 104 million baht allocated to help the poor in those provinces had been misappropriated, amounting to 85 percent of the amount distributed. An investigator from the Public Sector Anti-Corruption Commission stated that fraud came in various forms: there were aid applications with fake documents, applications accompanied by both genuine and fake documents, and aid applications from unqualified applicants. The destitute purported to be recipients either received no money or only partial payment. In some cases, culpable officials told the destitute recipients to lie to investigators, claiming that they had received the full amount due them. The crimes came to light in January. They were exposed by a group of Maha Sarakham University students, one of whom was later castigated by a professor for whistleblowing. They were told to complete forms and forge signatures on receipts for 2,000 villagers involving nearly seven million baht while they were working as interns at the Khon Kaen Protection for the Destitute Centre last year. They were ordered to do so by the departmental chief and some senior officials.

An illiterate 66 year-old grandmother who cares for her 15 year-old granddaughter with cerebral palsy is entitled to a caregiver’s allowance of 9,125 baht per month under the Empowerment of Persons with Disabilities Act 2007. As she was unaware of this, she never collected her allowance. She was invited to join the Network of Parents Club of Children with Disabilities in Kalasin Province. She was to take her granddaughter to the club three times per week in exchange for 1,000 baht per week. The club retained her ATM card and bank books. The president of the club induced her to sign an agreement to receive the 4,000 baht monthly stipend. The club allegedly collected the government disbursement of 9,125 baht, paid the stipend, and pocketed the 5,125 baht monthly difference. Thanida Anu-an, a whistleblower who uncovered the scheme, also helped to uncover several other similar cases.