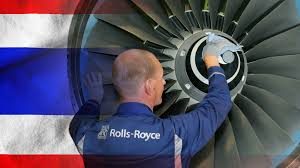 In January 2017 a four-year investigation by the UK’s Serious Fraud Office (SFO) came to light. It determined that aircraft engine-maker Rolls-Royce had paid bribes to “…agents of the Thai state and employees of Thai Airways…” in order to secure orders for the Rolls-Royce T800 engine for its Boeing 777-200s. Rolls-Royce admitted to the charge and agreed to pay penalties. The illicit payments of US$36.38 million took place between 1991 and 2005. Bribes were paid in three tranches:

The government rejected calls for Prime Minister Prayut Chan-o-cha to use his Section 44 powers to cut through red tape in the investigation of the Rolls-Royce bribery scandal. Response from the Thai government’s National Anti-Corruption Commission to information provided by the SFO, is said to be “tepid” and “…could be more embarrassing than the scandal itself.” Auditor-General Pisit Leelavachiropas said his agency suspected that between 20 and 30 people were involved. “It’s likely they accepted bribes,” he said.

In an action by the US Department of Justice (DOJ) against aircraft engine-maker Rolls-Royce, the DOJ claimed that Rolls Royce had paid more than US$11 million in commissions to win a deal with Thai Airways, aware that some of the funds would be used to bribe officials at PTT and its subsidiary, PTT Exploration and Production (PTTEP). The payments were made from 2003-2013 and related to contracts for equipment and after-market products and services. PTT vowed to investigate. Admitting its guilt, Rolls-Royce paid US$170 million to settle the case. Subsequently, PTT Chairman and CEO Tevin Vongvanich said that the company was unable to find anyone who “allegedly took bribes”.