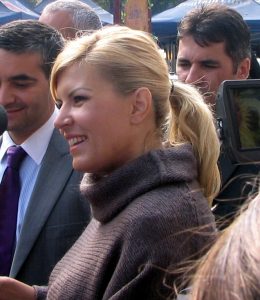 In January 2015, she was questioned by prosecutors from the National Anticorruption Directorate on charges of money laundering and false statements on declarations of assets, as part of a wider investigation into the Microsoft licensing corruption scandal. As a result, she stepped aside as PMP president, with Eugen Tomac taking over the party on an interim basis. The following month, she was indicted on two counts of influence peddling and one count of money laundering. The case was able to proceed after her parliamentary immunity was lifted. A second case involves charges of receiving bribes for a 2011 gala event in honor of boxer Lucian Bute. Udrea ran as an independent in the 2016 election and won some 3000 votes, well short of the approximately 25,000 needed to capture a seat.

In March 2017, she was convicted of bribery and abuse of power in the Bute case, receiving a six-year prison sentence, subject to appeal. Udrea reacted by characterizing the proceedings as a matter of life and death, stating she would not accept to go to prison for what she termed “completely unproven accusations” and “bold-faced lies”; she subsequently filed an appeal. That appeal was rejected in June 2018, when the High Court of Cassation and Justice upheld the six-year sentence.

At the beginning of 2018 Udrea had fled to Costa Rica, where she requested the right of asylum. Following the High Court ruling, the Romanian authorities announced their intention to seek Udrea’s extradition, despite the lack of a treaty between the two countries regulating the procedure. On 3 October 2018, Elena Udrea and Alina Bica, the former Chief-Prosecutor of the Romanian Directorate for Investigating Organized Crime and Terrorism, who also requested the right of asylum in Costa Rica, were detained by the Costa Rican Judicial Investigation Department at Interpol’s request and brought before the Criminal Court of the First Judicial Circuit of San José. A day later, the Criminal Court decided to remand Udrea and Bica for two months pending the presentation of the extradition papers by the Romanian authorities.