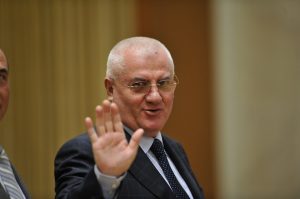 Dumitru Dragomir was the president of the Romanian “Professional Football League” from 1996 to 2014. Before that, he was president of Chimia Râmnicu Vâlcea, Olt Scorniceşti, FCM Braşov and Victoria Bucureşti.

He sat in the Romanian Chamber of Deputies from 2000 to 2008, representing Vâlcea County and winning election twice, in 2000 and in 2004. He was a member of the Greater Romania Party for most of that period, but resigned from the party in September 2008 and sat as an independent for the remainder of his second term.

On 23 June 2016 Dragomir was sentenced to 7 years imprisonment for tax evasion, embezzlement and money laundering. The sentence is not final.